These little lizards have been showing their faces around my house and garden lately, so I’d thought we’d take a break from the buzzers and introduce the Egyptian Fan-toed Gecko!

Also known as the Common Fan-footed Gecko, Ptyodactylus hasselquistii is reported to be “the most abundant of all lizards inhabiting the lowland wadis of South Sinai.” You’ve probably seen them around. They are easily recognized by their flared or fan-shaped toes.

The gecko pictured above was hanging out on my ceiling several weeks ago. Fan-toed Geckos are excellent climbers and can run easily across boulders, vertical rock walls, and cave roofs, as well as under ledges and overhangs. The geckos are able to do this thanks to thousands of microscopic toe scales – hooked, hair-like projections that allow the lizards to grip almost any surface.

Called burs abu kaf in Arabic, these medium-sized geckos have flat, narrow heads, short and slender limbs, and long tails. Their color varies greatly depending on their surroundings, but they typically have dark bands across their back and tails. Fan-toed Geckos are generally nocturnal, coming out at night to forage on insects and arachnids, but they can also be active during the day, especially when the weather is colder and they can be found sunning themselves in a sheltered and safe location. 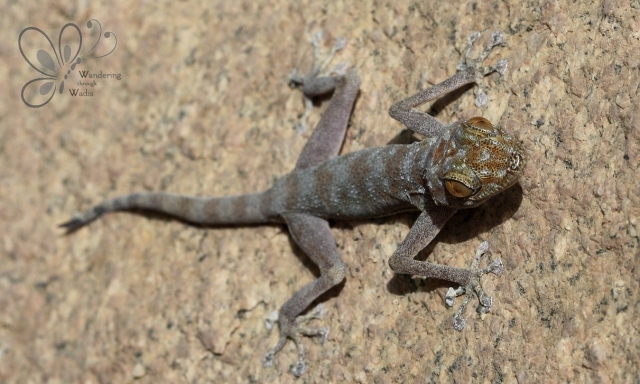 Most lizards are usually mute, but not these geckos! They will make a chirping or clicking sound – tek, tek, tek – to communicate with other geckos. (In fact, during my afternoon nap today, I’m pretty sure I heard the one that my cat chased into the kitchen a few days ago. Poor thing is probably stressed and wanting to get back outside.)

Another fun fact: Geckos do not have eyelids. Instead their eyes are covered with a membrane that they must lick to clean and keep moist.

Want to know more? Head over to Mother Nature Network and read 12 Surprising Facts about Geckos.

Note: There is another species of Fan-toed Gecko in South Sinai – the Spotted Fan-toed Gecko (P. guttatus), which the guidebook says is the species found above 800 meters. There may also be several subspecies of Ptyodactylus hasselquistii, but this is still debated by scientists.