Although I’m super excited to share this venomous viper with you today, I’m also super thankful that I don’t come across them more often on my wanderings. Why? Because “species in the genus Echis are responsible for the greatest proportion of all snake bite fatalities in humans.” (ARKive) Eek! 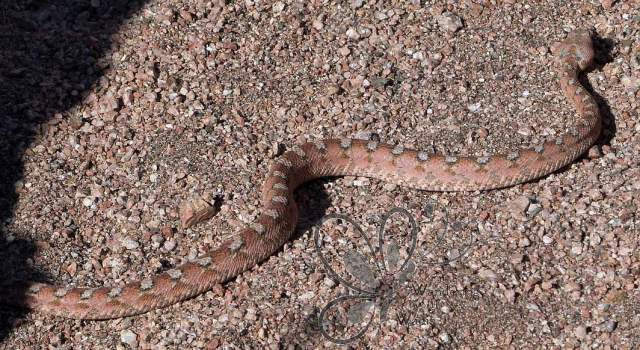 This Burton’s Carpet Viper (Echis coloratus) was spotted in a wadi in Dahab, moving away from us – or we wouldn’t have been so excited to come across it! But it took its time crossing the narrow path in front of us and then slithering its way up the sunny rocks, giving us plenty of time to observe its beauty.

These vipers have short, stocky bodies and wide heads and can grow to lengths of 75 cm. Their backs are covered with a pattern of pinkish-grayish blotches that have a darker outline. They also have dark gray bands that stretch from the eyes to the corners of their mouths. Their coloration gives them excellent camouflage against the rocks.

Called hayiah or um jenah by the Jebaliya Bedouin, these vipers are fairly common in South Sinai and can be found at elevations up to 2,000 m. They typically live in rocky mountainous regions, on steep slopes, ledges, cliffs, and in rocky wadis. They are nocturnal and crepuscular, active during twilight. But we spotted this one on the move at around 9 in the morning.

Another name for these vipers is the Palestine Saw-Scaled Viper. This name comes from their defensive strategy of rubbing their coils together to produce a strong hissing or sawing sound when approached, especially to deter humans as they don’t want to waste their precious venom on us. Other names include the Arabian Saw-Scaled Viper, Mid-East Saw-Scaled Viper, and the Painted Carpet Viper.

Burton’s Carpet Vipers are unusual among vipers as they lay eggs, whereas their relatives give birth to live young. The vipers feed on small mammals, birds, lizards, and large invertebrates. They have long, hollow fangs that they can reportedly fold back against the roof of their mouths when not in use.

Seeing as this viper and its relatives are considered to be among the world’s most dangerous snakes, I will be sure to pay better attention when I set up camp in the desert!

This past weekend we decided to wander along one of our usual routes, and I was treated to an unusual spotting – a sand snake! As we were walking, we passed a large dark boulder where I often spot agama lizards. I was just about to mention this to my friend when I looked down at the rock I was about to step on, suddenly realized that is what not a branch laying across it, and quickly had to swing around to avoid stomping on a snake. Eeek! I’m not completely comfortable with snakes apparently. But he was beautiful! A gorgeous golden-brown color with dark brown patterns. I wish I could share a picture of him, but I guess he was just as scared as me because he slithered away and hid beneath a rock.

We have spotted these sand snakes before, maybe three or four other times, in wadis near Dahab. The first time we saw one, in 2010, it was my husband who almost stepped on the snake. That time though, the snake stayed still long enough for us to take a few photos. And we were able to identify it as a Schokari Sand Racer (Psammophis schokari).

These snakes are long and slender; they can grow to a length of about 1.5 meters. The patterns and colors of Schokari Sand Racers can vary a lot, ranging from a light sandy-gray with pale patterns to strong, dark contrasting colors.

[UPDATE] Since writing this post, I’ve encountered more Sand Racers and, not being as startled, was able to get some new pics.

Schokari Sand Racers live in sandy and rocky deserts and prefer places with good vegetation. They are most common in coastal areas. During times of bird migration, these snakes might be found on nearby trees and bushes. Here they wait to feed on the small songbirds that are flying through.

Schokari Sand Racers are found throughout the Sinai peninsula and are actually one of the most common snakes in Egypt.

Notice the dark stripe that runs from the snout, past the eyes, to the back of the head.

And there’s a reason they’re called Sand Racers – they can reach speeds up to 16 kph when chasing prey! The snakes typically eat lizards, small birds, rodents, and other snakes. After grabbing their prey, they release a venom that immobilizes the animal before swallowing them head first. Despite being venomous, Schokari Sand Racers are generally not a threat to humans as their main defense is their speed. I’m grateful for that.

Have you come across snakes during any of your wadi wanders? How did you – or  how would you – feel about such an encounter?